The World Bank (WB) adjusted its growth expectation for the Mexican economy upwards and left it at 4.5% this year. The revised forecast is surrounded by "great uncertainty" due to the handling of the pandemic and the fiscal situation, explained Martín Rama, economist for Latin America and the Caribbean of the organization. 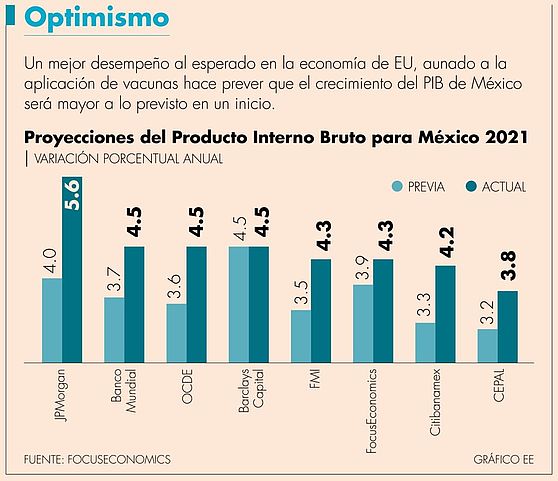 The expected rate of GDP is above the forecast that the agency had in January, when it anticipated an advance of 3.7%; It is in line with the revised projection of the Organization for Economic Cooperation and Development (OECD), also at 4.5% and is slightly below the average scenario revised by Banco de México, of 4.8 percent.

"Private investment could continue to be significantly affected by the proposed reforms, related to the participation of the private sector in the energy industry"; while the speed of vaccination in the second semester will determine the strength of the recovery of domestic consumption.

According to WB estimates, the performance of GDP will moderate for 2022, when they anticipate a rate of 3% and forecast a lower advance for 2023, of 2.5 percent.

The International Monetary Fund places Mexico among the countries that granted the most modest countercyclical policy, equivalent to 0.7 points of GDP.

In the report, entitled "Back to Growth", WB experts highlighted that Mexico, Honduras and Bolivia are the countries in the region that have seen "the greatest impact" on their poverty levels, as a consequence of the closures of business, unemployment and modest countercyclical policies.

As "fiscal buffers have eroded, and there are increasing and displaced spending pressures on public services and infrastructure, a tax reform is required to enable fiscal space."

They also highlighted that the government's commitments to "safeguard debt sustainability" and support Pemex "require a tax reform."

The forecast estimated by the World Bank for Brazil is 3%, which together with the Mexican performance, will lead to the GDP of Latin America and the Caribbean to a rebound of 4.4% this year. The regional forecast exceeds the 4% estimated in January.